The play started off with all the characters coming up on stage explaining what we would see in the play mentioning love, action, humor, and the power of imagination. They introduce us to the two ships that will be important to the play: The Wasp, the fastest ship in England, which had a trunk full of Starstuff, and the Neverland, With an identical trunk full of sand.

The first character introduced is Slank, played by Melissa Escobedo (‘18), the captain of  Neverland, who had bought three young orphans; Prentiss, played by Jimmy Santos (‘21); Ted, played by Kathy Caal (‘18); and a nameless boy who would later on be known as Peter Pan, played by Hector Pulido (‘21).

One of the main characters, Molly Aster, played by student director Gonzalez, is first introduced when she’s saying goodbye to her father. Her father, Lord Leonard Aster played by Zaid Mendoza (‘20), was entrusted by the Queen to board Wasp and take her trunk to the island of Rundoon and destroy it. Lord Aster pays Captain Slank to take care of Molly and her nanny Mrs. Bumbrake, played by Ariana Reyes (‘19), who would both be boarding The Neverland instead of The Wasp with Lord Aster.

Black Stache, played by Armando Sandoval (‘18), did not appear until halfway through the first act (when he kidnaps the captain of the Wasp and steers to a collision with the Neverland), yet still managed to steal the show. Lezly Hernandez (‘20) went to the opening night and said “The whole play was really good and I really enjoyed it, the Black Stache was definitely the character that made me laugh the most.”

At the end of the first act, the ships collide and the main characters swim to a nearby island, seeking safety.

The second act started off with what Mr.Bier said was one of the hardest parts of the play to prepare for, “I did not have any experience with directing musicals, and it came out great thanks to Jen [Gonzalez] and Armando [Sandoval] who were in charge of the choreography and the singing portions of the play.” The cast came out dancing in handmade mermaid costumes in a musical interlude.

After the interlude, the characters find themselves on the island, where the play reaches its climax. The boy with no name becomes Peter, we learn that Molly will be Wendy’s mother, and Tinkerbell is born.

On closing night, Gonzales, student director of the play and play-choreographer was honored with an award and graduation stole for being the first 4-year drama student since Mr. Bier became adviser. Seniors Sandoval and Escobedo were also recognized for acting in multiple plays. 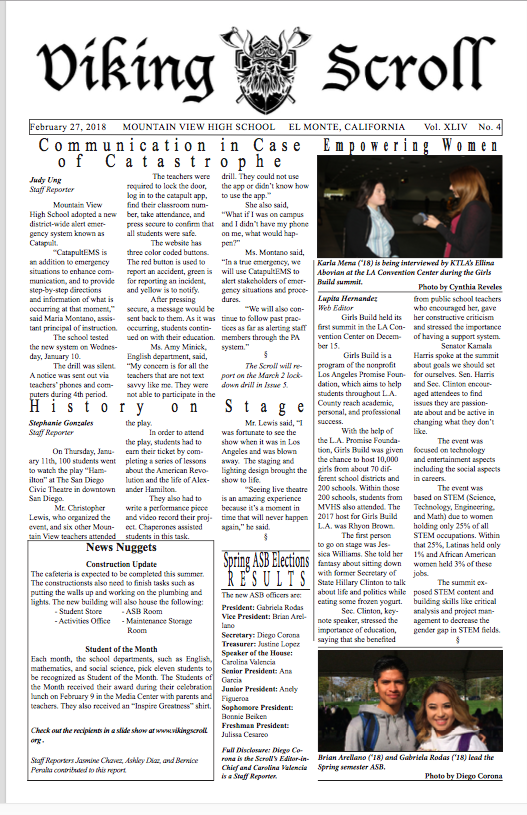 According to Web Exhibits, DST for the United States was enacted on March 19, 1918. It both established standard time zones and set summer DST to begin on March 31, 1918. Also, according to Time and Date, about 40% of countries worldwide use it to make better use of daylight and to save energy during the evening hours.

You might ask, “Do I lose or gain an hour of sleep this weekend?” According to Time and Date, you lose 1 hour in spring, but when DST ends in fall you regain 1 hour back. Paul Herrera (‘18) said, “I believe that Daylight Savings Time made a good impact [for] workers, however I think it’s not good because I lose an hour of sleep.”

If you are an undocumented student, there are resources to help you. These organizations work to support all immigrants.
Coalition for Humane Immigrant Rights (CHIRLA)